Gaming has taken the world like a storm. Back in the day, video games were presumed to be nothing but a time-consuming nuisance by most adults and entertainment means by the youth. Now, with the advancement of technology, the quality and competitiveness of video games are off the charts. ESPN even recognized gaming to be a national sport recently, terming it as ‘ESports.’

Real competitive gaming is possible with only the best of the best peripherals. With factors like footsteps, wind speed, and motion sound being crucial, having the best peripheral that delivers that audio accurately is a must. Games like PUBG, Fortnite, Call Of Duty: Warzone all require top-quality headphones if you want to compete against players and take the win home.

That is where headphones come in with their various functionalities and features. Most headphones have a lot of gimmicks such as RGB or aesthetics that can throw you off the requirements list, but it all comes down to two things; how good of a stereo or surround sound the headphone can produce?

Companies like Corsair, Logitech, HyperX, SteelSeries, Razer, and many more have been in the gaming headset competition for years. Their quality and performance alone keep them on the top of the list. When getting your ideal gaming headset, stereo and surround sound capabilities are of utmost importance if you really want to feel the game.

So, to help you with that decision, follow through this article to know more about what these are and how it would benefit you. When buying a gaming headphone, you will probably see the terms stereo and surround sound with its name. In many cases, a headset might feature both of these technologies together, letting you switch between them like the A4Tech Bloody G501; it features a dedicated controller that switches between surround sound and stereo.

More features such as noise cancellation, ear cup size, and audio isolation are also essential to choosing your ideal headset. But for starters, you can just look for stereo and surround sound for now. Gaming has never been more fun when a headset takes you deep inside the game itself; it’s like you are part of it. Additionally, horror games take advantage of this technology to make the games immersive and impose terror on the player. Headphones are part of your gaming rig and a part of yourself; if you know which to choose, it can take you a long way.

What is a Stereo Headphone?

The term stereo or stereophonic sound means sound coming from two channels. Stereo sound specializes in transmitting sound out of the two speakers of the headphones; the left and the right. Each side has its own channel that takes distinct sound and plays it out, giving the audio a surround effect.

Stereo headphones are the most common type of headphones around. It is most likely that you have encountered one or even better if you have used one before, you will know what stereo means. The two ear cups cover your ears entirely and block out any unnecessary background noise. Stereo sound is good for listening to music, watching movies, and of course, gaming.

To give you an accurate picture of what stereo headphones sound like, let’s say you ring a bell on your right side, and you keep ringing it to the left. Now, record that audio and play it back through a stereo headphone.

You will hear the ringing starting from your left and slowly dulling its volume while the right speaker increases its volume, and you hear the ringing from the right. This simulates a surrounding effect, and with the noise cancellation of the ear cups, it makes the experience all the more immersive and full.

Another common way to identify the stereo sound in a headphone is the distinct left and right speaker marked on the headphones; the left with an L while the right with R. Stereo sound headphones have been the fan favorite for gaming for years now and are continually recommended by professional gamers and Youtubers.

Games like CSGO and all other Battle Royale games take advantage of stereo sound in headphones to simulate footsteps, gunshots, and even movements between the bushes. While more story-driven games do not need any sound simulation because they are mostly enjoyed with speaker systems, they still use stereo sound technology to make the games more interesting and real.

Stereo sound in headphones may sound like the solution to everything, one headphone for all. Theseheadphones can change the way you listen to music on Spotify, you can hear the drums from left to right, or even sense a person walking around you in a movie. Stereo sound creates an illusion of your surroundings with its many audio channels.

Stereo-sounding headphones could be the best-sounding multipurpose headsets in the market. With its versatile functionalities and surround sound illusion effect, listening to music, watching movies, or even playing games have become more exciting and fun.

The most common use of stereo sound would obviously be gaming but with these headphones becoming more available and budget-friendly, you might see a person using a gaming headset to watch movies or music. Like the Razer Kraken Pro V2, a sleek stealthy gaming headphone that can also be rocked for listening to music.

When talking about the best, companies like SteelSeries, HyperX, Logitech, Corsair, and many others come to mind. Not to mention, the additional features that come with each headphone which gets them a place on the top. These headphones are judged by their responsiveness and input lag which is the most crucial feature of a headphone. 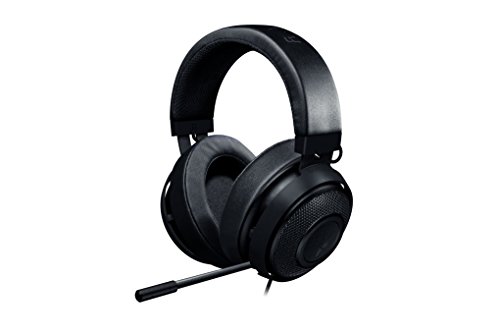 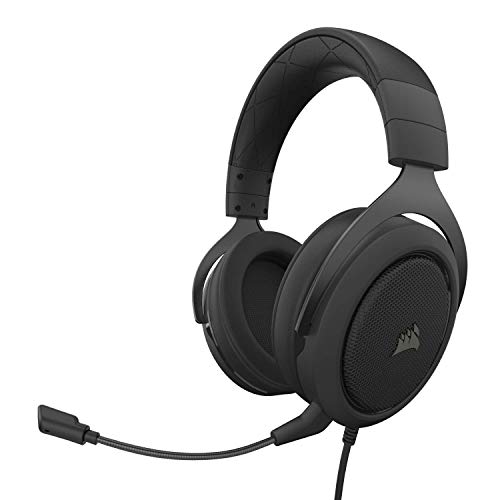 All of these headphones are internationally recognized and are used by ESports players.

Side by side comparison between HyperX Cloud Alpha and Cloud 2

What is Surround Sound?

The surround sound, by the looks of it, should be clear enough of its definition. Surround sound is a technology that takes advantage of multiple speakers around a user, i.e. multiple audio channels to enhance and enrich the depth of the sound experience. This was first introduced into movie theatres where the surround sound technique has proven to be efficient.

When buying a gaming headset, you might notice the words ‘surround sound’ being advertised a lot. This may be true but it is not as effective as it claims to be. Surround sound comes in two variants, virtual and true surround sound. Now, mimicking the surround effect by stereo headsets is easy but the quality is mediocre compared to actual surround sound headsets.

Surround sound works with a much wider range of frequencies and with multiple speaker drivers. Hardware like headphones have a limited number of options and so to get that surround sound effect, it is potentially difficult to integrate. Most headphones use the stereo drivers with one of three surround sound virtualizations; Dolby, DTS Surround Sound, or Creative Media Surround Sound 3D(CMSS-3D).

These virtualization systems will show you that a number of speakers are in effect but in reality, it only adjusts the volume and delay of the sound output between the two speaker drivers, the left and right. This technique in turn tricks your brain into thinking the sound is heard from the far end of the room.

Now, when it comes to actual surround sound, there are two types, 5.1 surround sound, and 7.1 surround sound technology. Both of these do not use any virtualization standards to simulate the audio, but rather they use a number of sophisticated speaker drivers built directly into the headphones. You can see them if you remove the top plate of one of the ear cups.

These headphones comprise 5 individual drivers, placed in significant positions across both ear cups and an additional 6th driver for the bass, also known as a subwoofer. These drivers work collectively to create a multidimensional audio experience which is ideal for gaming on the competitive platform such as online multiplayer and also, for watching movies as well.

Popular games from big developers and console-based story-driven game developers use this system to make their games more immersive and competitive. You can hear footsteps coming from you back, your right, or even from the corners with these drivers enabling you to react quickly to action. Similarly, when watching movies, you can experience every footstep and noise in all directions.

The version, 7.1 already sounds way ahead of its time and it is. To simply put, the 7.1 surround sounds work the same way as 5.1 but with more driver, a 7th dedicated left and right channel. If you are looking to transition from 5.1 to 7.1, you might not notice any difference except for a clearer sound and a more rugged look.

On paper, 7.1 headphones are supposed to give you an even more immersive experience but, since most games do not support this, buying one will deem useless. If you are a gamer, you might know of Shroud and may have seen him playing PUBG.

Aside from his raw talent and inhuman reaction, he uses a Logitech G Pro X that features 7.1 surround sound, and the way he uses it is unnatural. A small sound from far away can be heard using these headphones and the results are clearly seen on his streams.

As usual, big companies like Razer, Logitech, Corsair, HyperX dominate the charts for best gaming headsets. They manufacture all kinds of headphones and mostly focus their efforts on the more advanced surround headsets. Some of which are given below: 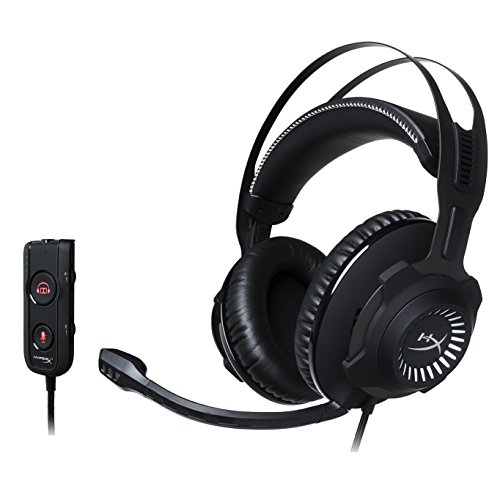 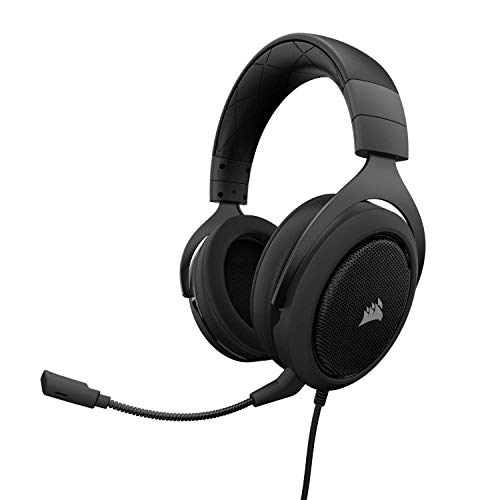 Grab your suitable Sound BlasterX for your headphone

Which of the two is ideal for gaming?

To be a true gamer means having the right peripherals ideal for the games you want to play. Now you can go overboard and buy the best of the best in the market or be selective and mindful of the budget. Stereo headphones may be the cheaper option if you are starting as a gamer and want to get into it as fast as possible.

Last but not least, for the gamers who do not have to worry financially, the 5.1 and 7.1 surround sound gaming headsets are for them. 5.1 may be the ideal headphone for its true surround sound nature and some of the manufacturers even add a 7.1 virtualizer, making them perfect for any type of gaming or audio activity.

Finally, to answer your question, the ideal gaming headphones should feature surround sound. With video games getting harder and more immersive by the second, having a headphone that features surround sound will help you in the long run. Although 7.1 surround sound headphones may seem unnecessary, you can still buy one to futureproof yourself.

Stereo headphones can still be used for gaming but lightweight. Stereo gaming headsets are budget-friendly and can fulfill your minimum requirements, you can watch movies, listen to music, or even play some games where the sound does not matter as much to you.

To conclude, Stereo vs Surround sound speaks for itself. In the end, it all comes down to what you can afford and what do you want out of the device. The best way to know which suits your needs is to test them out. Go to a store and take their demos for a test drive, or watch a Youtubers review, or even better, read this article again as it will answer your question.