We have reviewed many speakers in the past. Enlightened you with the unique characteristic each speaker had and showed you the differences among them. Today we will be talking about two speakers from the same manufacturer. The speakers are the KEF LS 50 and KEF LS 50W. One is the wireless version of the other one.

Now, you might have many questions in your mind. Like: which speaker outshines the other? Are the differences noticeable or both the speakers are similar? Has the sound quality improved? And many more. To get the answers to these questions you have to keep reading. At the end of the article, you will be able to differentiate between the two speakers based upon its unique features and make the choice of which one is suitable for you.

The main difference between the KEF LS50 and KEF LS50 W is that the LS50W is the wireless version of LS50. The anniversary product of KEF i.e the LS50 had won many hearts by its clear sound quality. But the LS50W has outshined its predecessor. Being wireless and providing the sound of a high-end speaker LS50W has made its way to the top.

Apart from being wireless, there is much other difference between the two speakers. So, stick around and you will find out which one is better and convenient for you.

Differences at a glance:

Let’s have a look at the key differences between the KEF LS50 and KEF LS50 W.

Based on the looks of the two speakers they seem quite similar. The designs match a lot but the materials used are quite different.

The use of Plied MDF for making the cabinet in the LS50W has made it look more refined than the  LS50. It almost feels like that it is made of ceramic providing that artsy look. KEF did an amazing job of crafting the outlook of the LS50w.

Now, the specialty of the LS50 and the LS50W is the Uni Q drivers. The drivers add an extra spark to the whole look of the speakers. The outstanding color contrast between the cabinet and the UniQ drivers is mind-blowing. The LS50 had a color combination of Titanium grey and gold which changed into white and rose gold in the LS50W. There are also some other color options. You can choose the one that goes with the entire look of your room.

The LS50W also has a small screen on the top of the right speaker. In case you are not feeling to use the remote you can control the inputs through that screen. The black screen with white text seems very elegant. 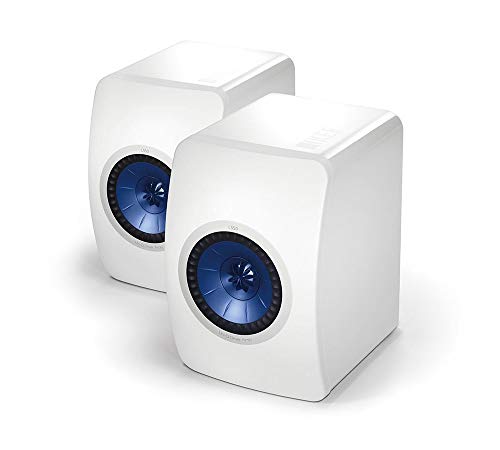 The KEF LS50 is one of the most award-winning speakers from KEF. It got recognition from Stereophile, What Hifi as well as The Absolute Sound. Its amazing features have impressed most of its users. The sound LS50 produces is remarkable. It radiates clear, fast, and expansive sound with its Uni Q driver array. The shape of the speaker plays a great role in creating unaltered sound. The baffle shape and port design is the main reason behind it. It creates a large listening sweet spot for you. So, you can get the best experience sitting anywhere in the room.

But if you compare the speaker with a high-end one you will notice that the sound is not that much refined. This is only noticeable if you are an audiophile and are a fan of that pin dropping sound. Otherwise, you will not even realize it.

As a bookshelf speaker, the bass coming from the LS50 is adequate. It’s not as good as the Audio focus speakers but it is okay on its own. Then again the moment you turn on a subwoofer this problem is solved. And it feels like full-sized tower speakers. You can also try putting it against a wall on a proper stand to get the best output on the bass. It has a sensitivity of 85dB so you will require a better power as well. 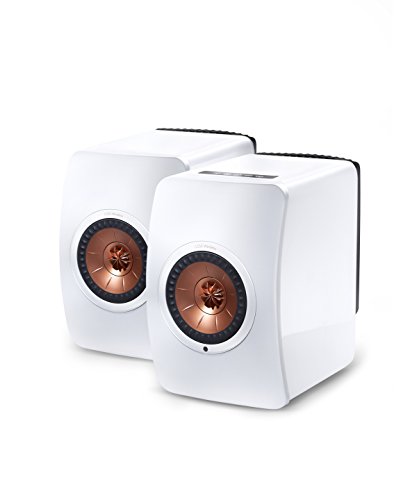 Although this speaker is known as the wireless version of the LS50 it’s not. It requires a power cord as well as an Ethernet cable to stay connected constantly. So, its anything but wireless. It has been named wireless maybe because of the ability to stream music through WiFi and Bluetooth. It would be great if it didn’t require any wire.

Apart from WiFi and Bluetooth LS50 W is also compatible with RCA inputs, optical, and USB. If you want to use your PC as the source then a USB port is a must and the LS50 W provides that. Then again if you have an old version of Bluetooth say version 4.0 you can still use the LS50W with it. Although you are supposed to have a laggy transmission using this version the sound quality remains high in the case of the LS50W.

The LS50W uses a DSP to influence the frequency response. So, whether you are using analog or digital input it doesn’t matter. The inputs go through several processes before it reaches the driver. Here the analog signal is converted to digital, processed then again converted to analog. The procedure ensures that you get that crystal clear sound no matter what the input is.

Inside the speakers, there are two amplifiers. As we have mentioned earlier one is 200 watts and the other is 30 watts. The 200 watts Class D amplifier is for the bass and midrange and the other one is for the Tweeter. Since the Tweeter is more sensitive in this speaker so it requires less power than the lows. As a result, it leaves more room for equalization in the lower frequencies.

It has been mentioned innumerable times by many users of both the speakers that the LS50W has outshined the LS50 when it comes to sound quality. It produces sound like a high-end speaker.

If there’s any word that can describe the sound of LS50W than it’s “clear”. The crystal clear sound is so refined that you can even hear the sound of a pin drop. Each and every instrument is clean and precise. This is not at all expected from a speaker of this size. Quite astonishing right?

The LS50W has a bigger sound stage than the original KEF LS50. For this reason, the bass is better in the LS50 W.

It’s very good for instruments like triangles and cymbals because it has a metal-based Tweeter. As a result, the sound is very sparkly. The musical notes are naturally placed in a three-dimensional field. The only issue you might be having with these metal-based tweeters that the sound may get a little bit too bright. So, this might not be good for you if you are not a fan of such bright sound but for those who like it, it’s phenomenal.

Another point to mention is the amp power. The original LS50 has a lower amp than the LS50 W. This may cause the sound to be a bit thinner and hollow in the LS50. But in the LS50 W, this problem is sorted out. With an amp power of 230 watts, it will meet your expectations in no time. Now, coming to the bass. The bass has a smooth transition from mid-bass to midrange and then to treble region. In many speakers, you might have noticed that the sounds are not well combined. Sometimes there’s a delay in sound one after another. The LS50 and LS50W don’t have any such issue. But a problem that LS50 users face is the lack of the lowest bass.

Overall the Uni Q drivers in addition to all these features create the best sound you can dream of from a speaker like this.

For the original KEF LS50 placement was not that big of an issue. It sounded good wherever it was placed and filled the room very convincingly. But in the case of LS50 W placement plays a great role.

If you keep the speakers of the LS50W close to the wall it will sound like a mediocre speaker. You might think now that then why are people comparing it with $10,000 speakers. The reason is the placement of the speakers. You will need a well-treated room to get the best outcome.

Now if you place the LS50W speakers in a room about 20-30 cm away from the wall you will hear the most natural sound. By playing with DSP a little bit and setting it up correctly you will be impressed by the sound it produces.

So, to get the best out of the LS50 W speakers consider the placement of the speakers and DSP corrections according to the room.

When it comes to the built-in equipment the LS50W has the upper hand.

The Cambridge Audio Azur 851A is an above-average integrated amplifier. It makes your speakers more powerful and heavy. By integrating such costly and powerful equipment with the LS50 didn’t give the same result as the LS50 W alone. Isn’t it shocking?

The LS50 W sounds more dynamic and ecstatic while the LS50 sounds slow and calm.

On the contrary, if you have an amplifier that has a better synergy than the Azur 851A possibly not costlier but is a better combination for your LS50 then the situation might be the opposite.

Based on the features you might be a little more inclined towards the LS50W. But wait a minute and reconsider your thought. Before reconsidering keep in mind what type of audiophile are you. Because if you are a rock and roll fan then the LS50 is definitely not for you.  If so LS 50 W will be the one for you. Then again if you like neutral sound with precise musical instruments go for LS50.

You should also think about the room where you will keep the speakers. Since placement has a great role in the sound the speakers produce and also it requires floor stands of appropriate height so choose your speaker accordingly.

Identify which speaker suits you the best by a thorough analysis of the features as well as the other factors required to get the best results. The decision of which speaker you want depends on your demands. So, clarify what you want and expect from the speaker then go for whichever is the best for you.