If you want to spice up your home theatre system and want to have a really great audible output, studio monitors can be a good addition for you. They are not too high profile as sound equipment; you can easily use them at your home and enhance the sound system.

And nowadays if you want to choose a suitable sound monitor according to your preferences, there are too many brands and monitors out there to choose from. Depending on quality, among the choices you can have, the ‘JBL 305p MK II’ can be a really good one. This article will help you to have some insight into this particular popular studio monitor.

JBL has been one of the most popular brands for quite some time regarding sound engineering. It has constantly raised the bar for other contemporary sound engineering brands since it started its journey in 1946. Except for studio monitors, it is also renowned for producing headphones, speakers, headsets, etc.

JBL keeps innovating better quality pieces of equipment every year and has become a favorite brand for musicians, producers, sound engineers, and recorders. Like any other equipment, they tried o introduce a studio monitor which will be of really good quality. Previously JBL produced many good quality studio monitors. So, JBL 305p MK II is set to be quite an impressive successor for all those studio monitors. Check out if you can Use Studio Monitors for Regular Speakers. 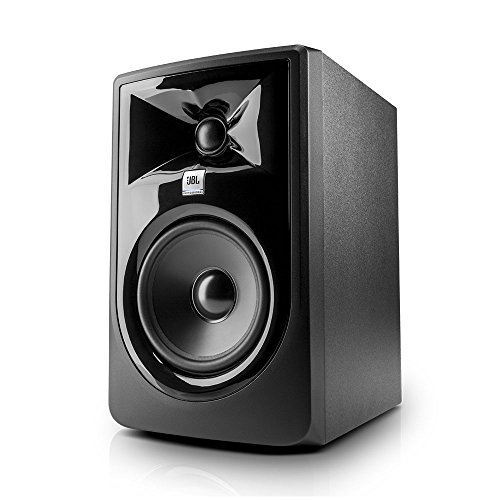 And the pricing is not too high either, comparing the price of other available studios on the market, considering that it provides really expert quality and also good clarity and definition.

Among the other key features, the JBL 305p MK II has some other great features.

And all these features come with a comparatively low price. However, some can find the monitor design a bit bland, and the bass boost feature is not available in this studio monitor.

Like the other 3 series of JBL, an Image Control Waveguide technology has been added to this studio monitor. This technology manipulates the waveform distribution of the monitor, which allows the sound to reach every corner of the room. They have managed to provide such an expensive technology in an affordable studio monitor like the JBL 305p MK II.

Bottom line is, the specs provided by this are so captivating and above average for such an unexpectedly lower price, and also the sound produced by this is really powerful and comes with high clarity and definition.

We talked earlier about the power drivers of the JBL 305p MK II, which have 41 watts, whereas the average of 20 watts per driver is a basic demand for volume levels. Its drivers are amps of Class-D. There are seven different kinds of classes for amplifiers, while class A being the simplest and class G being the most powerful and efficient of them all.

However, Class D is a really good one in power management and in being efficient. And for being more efficient in power management gives the amplifier the scope to be smaller without sacrificing definition and quality. So this studio monitor can produce higher volume levels without being bigger in size. It can also extend the lower frequencies longer for being its cabinets ported. The bass sound of the studio monitor drops longer for the extended lower frequencies.

Moreover, the configuration of the JBL 305p MK II is bi-amp, as it works with two different amplifiers, where each of them is used to adjust the low and high frequency. As two amplifiers are used to have a more profound and accurate frequency response, a more defined sound is produced by the studio monitor. And each amplifier keeps creating more dedicated frequency for the monitor than single amplifier ones.

A versatile sound is provided by the JBL 305p MK II, so all types of sounds and songs can be accommodated by this. Most of the typical speakers can give a strong bass, but their sound lack clarity. If you test the speaker’s sound regarding its bass control, sonic balance, dynamic range, and vocal clarity, it will pass all the tests with distinction. As the studio monitor can easily handle extremely low frequencies.

And also high frequencies are easily handled. Rock music, classic music, jazz, etc everything can be played comfortably with it, as the output is bound to be really crisp and deep. And human voices of songs also sound really organic rather than muffled and processed with the JBL 305p. The sound of movies also gets really lively with this one.

The JBL 305p MK II speaker is a variant of 5 inches. The low frequency sounds hardly get scattered while playing this, rather they get controlled really well. And the high frequencies are also handled really well, so it can give you a really enhanced and magical experience while you are listening to operas or playing musicals.

And the mids are also pronounced really well and don’t get muffled by the lower ones at all. It’s clear, vibrant and natural, reflects the intention of the musician completely.

So, in a word you can get the best sonic quality for your songs or movies or whatever you play with JBL 305p MK II and with such a considerate price. You can easily buy this studio monitor from the popular marketplace Amazon with only USD 119.

They aren’t the cheapest studio monitors on the market, but they are still reasonably priced. Here, the old saying “you get what you pay for” holds true. You won’t receive some of the more costly studio monitors’ high-end features, but you won’t be left with a bunch of cheap rubbish either.

If you’re searching for low-cost hi-fi, the LSR305P MkII is hard to beat, especially since I’ve seen them for as little as £99 each.

However, if you enjoy the notion of active monitors, you might be interested in JBL’s bigger versions. The LSR308P MkII (around £500) adds an 8in the bass driver. Both variants also employ more powerful 56W amplifiers for each speaker. If you want greater volume and bass extension, look around since the LSR305P MkII’s larger siblings are available at a significant discount.

And if you are not yet charmed by the really good specs and sound qualities of this studio monitor, then the awards and recognitions won by the JBL 305p MK II might be able to persuade you. In the 34th NAMM TEC Awards, which is considered as the academy award for the sound and audio recording industry, it has won the 2019 TEC Award in the category of studio monitors.

The best pioneers in this field get this kind of recognition by the NAMM TEC. It has also won awards in the 33rd Annual Music and Sound Awards. So now you can easily guess how good of addition it can be for the sound system of your home. It can give you the best enhanced audio experience and take you to the world of beautiful music and sound.

You might have a question that is scratching you from the very beginning, well let’s find out the answer.

Is it worthwhile to invest in high-priced studio monitors?

If you’re making and recording music, they’re well worth the money. It’s not totally accurate that they’ll sound bad if the environment isn’t properly treated. Studio monitors have the benefit of providing a flat sound, which implies extremely detailed sound in the lows, mids, and highs.

What is the best way to connect my JBL 305P MkII to my computer?

A 3.5mm to dual ts cable would work to connect directly to your PC. You’d have to adjust the volume from the rear of each speaker or via the glass. Get something like the jbl nano patch if you want a hardware volume knob. Two xlr cables and a standard 3.5mm stereo audio cable are required.