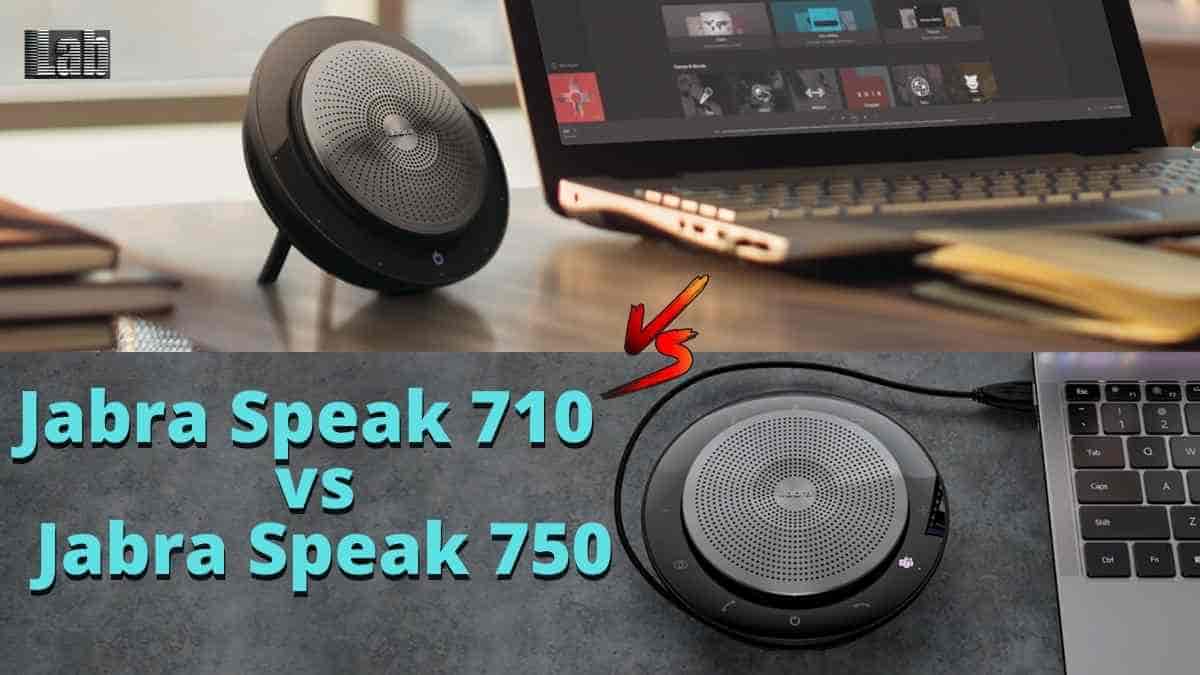 In today’s global market, constant communication world-wide is a key component to success. Keeping up with other branches of a company or simply checking on a team on an off-site mission means maintaining online communication whenever possible like Jabra Speak 710 vs Jabra Speak 750. That’s exactly why speakerphone devices have seen growing popularity with Jabra being one of the market leaders.

Making those day-long meetings just a bit more convenient through their easy connectivity and long battery life, the Jabra Speak 710 vs Jabra Speak 750 series gives everyone a break from constantly keeping those headphones on during that day-long zoom meeting that is so common during this pandemic.

This article looks at the two latest models of Jabra conference speakerphones: Jabra Speak 710 versus Jabra Speak 750. if you want to know more about other similar kinds of Speaker brands, check out this JBL vs Sony Bluetooth Speaker: Model by Model Comparison

Despite the 3 year distance between the two models, not much seems to have changed. This brings us to the question, is it worth upgrading from a Speak 710 to a Speak 750? Or is this Jabra’s way of price spiking its products? Let’s take a closer look.

As mentioned previously, this 2017 model of the Jabra Speak series overtook the already well-received Speak 510.

The speaker boasts a fashionable, circular, plastic body with a steel speaker grill and 10 touch buttons along the rim for various functions such as taking a call, linking, and Bluetooth buttons for other 710s and or other devices and standard volume changing options.

Compared to the Speak 510, the 710, being a fresher model in the line, delivers a more promising experience in the conference speaker industry with greater range, more user coverage, and a much more professional and polished look to the speaker itself.

The 710 also introduced the Jabra Link 370 USB adapter to ensure better Bluetooth connectivity so that that important business call does not disconnect mid-conversation. Furthermore, a nifty little kick-stand was added to the back of the speaker too. Allowing you to turn that speakerphone into a cool speaker to listen to your favorite music as well!

If you’re looking for a good sound experience, the 710 Speak will not disappoint.

The built-in HD audio quality not only provides clear sounds from the speaker itself but also provides sharp accurate mic audio. Moreover, the mic has a 360-degree audio pick-up range meaning everyone in the meeting will have an equal say in every discussion!

710 also has a built-in duplex audio meaning that both sides of the conversation will take place in real-time, giving you the sensation of having a real-life conversation. This further translates to better, uninterrupted dialogue which can be very useful for those online meetings that this pandemic has made ever-so familiar for us. 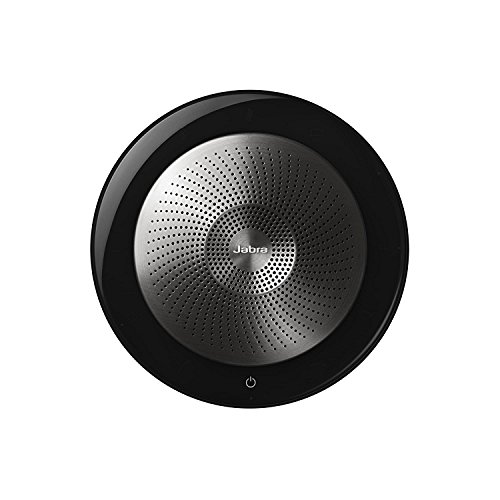 The Jabra Speak 710 conference speaker comes with 3 key features that ensure you have a stable connection between your device and the speaker itself. These include:

Thix speaker is not only capable of linking with other 710 series’  through the linking feature but can also connect to two Bluetooth devices at the same time. That’s why, the speaker can function both as a laptop audio output and a Bluetooth speaker for your phone if you’re moving around the house!

Jabra Speak 710 boasts an excellent Bluetooth range too at 100 feet or 30 meters max range with the ability to have 6 people seamlessly use the device! If you’re confused about the connectivity and placement, take a peek at Where should you put your speaker in a room?

The built-in USB cable is also the primary charging method for the speaker. Lasting for roughly 15 hours on a full charge, the speaker itself charges for a maximum of 3 hours so you know you don’t have to worry about it dying on you during those zoom meetings!

Charging can be done through a USB power outlet; be it a computer or an iPhone charging brick. As long as there’s a USB port, your charging issues are nothing to worry about!

Despite being launched 3 years after the Speak 710, the 750 shows little change compared to its predecessor.

With slightly more weight at 15.8 ounces (710 weighed 10.5 ounces) and a slightly different pattern on the speaker grill, the 710 and the 750 are almost identical.

The 750 also has the same 10 touch buttons on its rims. It also has a plastic body with a metal speaker grill with an integrated USB cable used for both charging and audio connection. Furthermore this epakerphone provides the Jabra Link 370 USB adapter for better Bluetooth connectivity too along with a fashionable kickstand that can turn the conference speaker into a music speaker seamlessly. 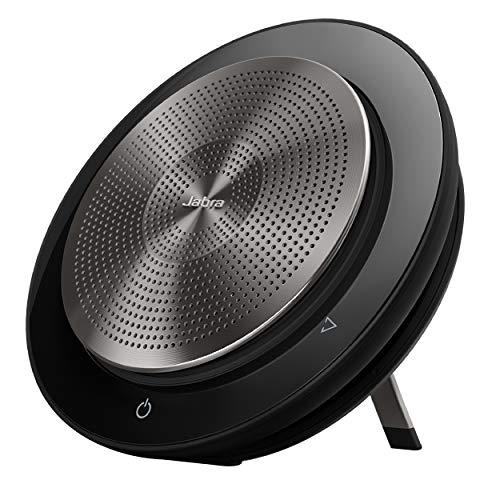 This is where a subtle difference between the speak 710 and speak 750 can be detected.

Despite the audio quality of the 710 already being very good, the 750 delivers excellence. Both input and output audio from the 750 sounds much more clear and crisp making the conversation seem more genuine; allowing better communication to be achieved on a global scale!

Moreover, it also has the duplex audio feature built into it aiding real-time conversation experience along with an improved version of Jabra’s famed HD audio feature.

The 3 key features related to connectivity remain the same. These include:

However, the difference between the 710 and the 750 is seen when it comes to the 750’s range. As surprising as this may be, the Jabra Speak 750 can only connect wirelessly to a maximum distance of 10 meters of 33 feet. This is a major decrease from the 710 despite the 750 being the slightly more expensive version!

Read: Kanto or AudioEngine–which one should you buy?

Similar in this category as well, the Jabra Speak 750 requires 3 hours of charging to reach its full charge which results in playtime of 11 hours. Charging can be done through a charger that is USB compatible and is charged through the built-in USB cable. Click JBL Charge 5 and JBL Charge 4 to get to know about the Bluetooth speakers with battery life.

Hence, the 750 is just as reliable in terms of battery life as the 710. If you are curious about Bluetooth speakers, take a look in here for more informations here in Bluetooth Speakers.

The Jabra 710 has a total of ten touch buttons on its upper hand. Mute, battery level, volume up, pause, end/ reject, control, call, multiplayer, volume up, and Bluetooth are the keys. Every single one is self-explanatory.

Like the 710, the 750’s buttons are simple to use and understand: mute, battery status, volume up, smart button/ play, end call, power on/ off, response call button, connection button, volume down button, and finally the Bluetooth button.

From the list above, we can see that most of the features between the two conference speakers are the same. With their circular shapes and the way the USB cable, Bluetooth connector, and integrated table stand are all stored, they have an almost identical overall style. Both support the same number of people, namely six, and the audio and microphone output is almost equal.

That being said, they do not tend to be comparable in terms of battery life, as the Jabra 710 will last up to 15 hours while the 750 can only last 11 hours after charging. 710 also delivers extra certifications from meeting programs and better noise cancellation.

The only major difference lies in the Bluetooth range where the 710 is clearly superior as it can cover a whopping 100 feet compared to the 750’s underwhelming 33 feet Bluetooth range.

Besides that, since it is small and lightweight, the Jabra Speak 710 is easier to carry. Take a look at Best Bluetooth Speakers Under $30 if you are interested in portable speakers.

The 710’s sound clarity is incredible; it’s absolutely simple, and you’ll have no problems understanding your friends or colleagues. The microphone is similarly omnidirectional, meaning it picks up voices from all directions. The 710 can also be used as a mic, and the audio it provides is very transparent and crisp even when used that way.

When used as a speakerphone or an external music speaker, the audio provided by the 750 is excellent and crystal clear. The omnidirectional microphone on top, similar to the 710, receives voices from all directions. And the tone would be crystal clear for both you and the person you’re speaking with. Also read about reasonably priced audiophile speakers also for better performance.

Keeping this key difference in mind, the fact that the speakers are nearly identical and that the Jabra Speak 750 is more expensive too on most websites, without adding much in the sound quality.

This small device is a high-rated speakerphone that provides Sennheiser premium sound for a great call experience and can even be used to play music. It will hold up to eight people in a conference call, which is more than Jabra’s, and it also has LED indicators. However, it has a smaller Bluetoorh range and is more expensive than the Jabra Speak 710. You can know more about Sennheiser take a peek in here Sennheiser GSX 1000 vs Sound Blaster Z: Find the Best One