If you have gone through the Bose soundbar 300 vs 500 vs 700, and sighed about Dolby Atmos, then Bose has good news for you. Comparing Bose 900 soundbar vs 700 there are several reasons to go with the 900. It is the latest Bose soundbar model that supports Dolby Atmos. Although the 700 soundbar is not bad or doesn’t show poor performance, you will find several users who are disappointed after buying it.

It’s just that we expect a bit more from Bose and it seems more like an upgrade to TV speaker and not suitable for things like playing games. However, if you want the best cost-effective solution, then you can choose the Bose 700 soundbar and a subwoofer rather than spending that money only after the Bose 900 soundbar.

In case you are serious about your audio or will use the soundbar for gaming performance that requires high-end sound, comparing Bose 900 soundbar vs 700, go with the 900 model. Bose ensures durability and long lifetime of the soundbars. There are flexibilities like Bluetooth, Voice4Video, Wi-Fi and Bose Music app which makes it easier to use. 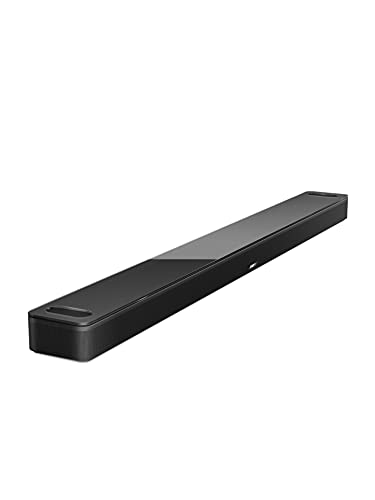 Bose 900 soundbar vs 700 gaming, which is better? Well, Dolby Atmos and Dolby Digital will deliver immersive gaming sound. More number of channels are capable of impactful and powerful audio enveloping the user.

With balanced tonal characteristics and adjustable bass levels, music is well-handled. In terms of comparing Bose 900 soundbar vs 700 movies, the Bose 900 is again our favorite. 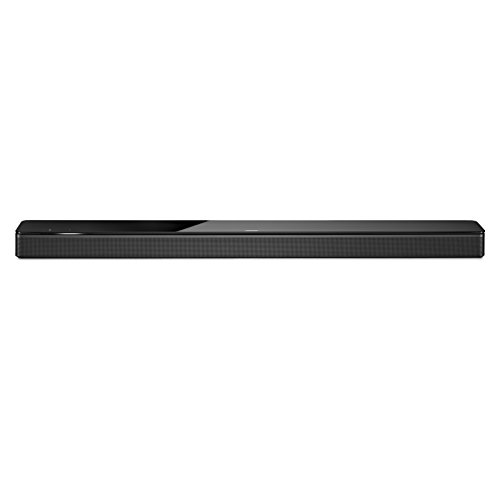 Without further ado, lets look into the Bose 900 soundbar vs 700 review.

Comparing Bose 900 soundbar vs 700 dimensions, the 900 is slightly longer than the 700 which means you can pair it with larger TV screen sizes. You can pair it with 55” or 65” TVs. 75” TVs can also be used specially if you create a home theater with surround speakers and subwoofer. The Bose 700 can be easily used with 55” or 65” TVs. The small height of the speakers makes these soundbars ideal to sit under the TV without blocking the view.

Bose 700 and 900 soundbars have a sleek and slim look. They both look similar except the two openings on the top of the 900 Bose soundbar. Both are available is black and white color. the materials used to make these models are same. Bose gives you a cleaning cloth and you are going to need this often.

The sturdiness of Bose 700 and 900 is outstanding. The soundbars are made of high-quality plastic and the body is wrapped with metal grille. Overall, it gives you a premium feel and are durable.

Comparing Bose Smart soundbar 900 vs 700, the 700 model doesn’t support Dolby Atmos or Dolby Digital Plus. While the Bose 900 soundbar has these two along with TrueHD, it doesn’t support DTS. This seems like a moving backward. Apart from this major difference, several other features are similar. For instance, room calibration and Voice4Video.

Since there is almost no room known to have perfect room acoustics, Adaptiq calibration feature is a life savior. Adaptiq room calibration software of Bose is quite reliable that measures and analyzes room structure and its objects. This brings a change is sound and it is noticeable as well. Using PhaseGuide and QuietPort also remains the same in both.

Bose 700 vs 900 soundbar, which one sounds the best? Let’s start with the Bose 900 review. The Bose 900 has a strong bubble of sound when compared to the 700. Although it lacks DTS, Dolby Atmos creates immersive and prominent audio to engage you into any content. The PhaseGuide in Bose 900 helps to provide multi-directional sound.

Up-firing speakers act as if audio with coming with ceiling speakers. Movies become cinematic and lifelike. The soundbars has a dedicated center channel along with Dialogue Enhancement modes which make the vocals clearer and crispier specially needed for movies, podcasts, or TV shows. Bose 700 and 900 have side-firing channels deliver a broader soundstage and room-filling audio.

Comparing Bose 900 soundbar vs 700 audio qualities, the surround sound is much better with Bose 900 than the 700. With 5.0.2, Bose 900 is capable of creating immersive and impactful area of sound around the listener. Instruments and dialogues of Bose 900 are well-represented. While playing games or watching action movies, the audio seems to come from a general area rather than being specific.

This is same for both. Bose 900 and 700 soundbar have a neutral and balanced type of tone in their sound. However, the Bose 900 might seem bright sometimes. Tweaking the settings is a must to improve the low-end. So, you will not receive the best audio out of the box from these models. The measured SPL of Bose 700 and 900 are almost similar indicating they can get quite loud without distortion.

Bose 900 delivers clean and clear mid-range and treble region. The low-end can be improves by adjusting bass level. Comparing 700 vs 900 Bose, Dolby Atmos makes a huge difference in the sound quality. Low latency makes these soundbars best for games or videos. Audio and video sync are perfect.

There is no support for 4k passthrough for Bose 700 or 900 soundbar. Video, specially playing games are delicate and most affected by the sound quality. These soundbars have an average performance in displaying video. Sound doesn’t follow the actions on-screen which is needed for games to create better experience.

Setting up Bose 700 and 900 are quite straightforward.

Voice4Video makes it easier to command Alexa. You can use it to ask Alexa to turn on/off or control your TV along with other devices like cable or satellite box. Integration of Alexa and Google Assistant into Bose 700 and 900 makes it quite flexible in terms of control. Along with this the Bose music app remains same for both models.

Comparing the Bose 700 vs 900 remote, we didn’t expect it to be different. The Bose 700 has a Universal backlit Bluetooth remote control that has several buttons to control the bar. Bose 900 has an IR non-backlit remote with few buttons. You need to rely on the Bose music app to control several settings.

The Bose 900, use the app to change bass, treble, height channel levels and enable/disable th Dialogue mode. The Bose Smart soundbar 700 remote lets you control other devices in the household whereas this isn’t possible with the newer 900 model. While this isn’t a major downside, we expected the best features from the 900. With HDMI CEC, use the TV’s remote to control the soundbar.

The soundbars can fill up large spaces or crowds easily. Even if you have confusion, you can place the Bose Smart soundbar 700 is a medium sized room but the 900 is easily suitable for large spaces. Most users place the soundbar between the legs of the TV and on the tabletop but on inside closed cabinets. However, if you have space constraints or want a cleaner look, you can wall mount them.

For this you need to spend again and buy the Bose wall mounting tools. Mount them 4” away from the TV. If you have other wireless devices in the room, keep them 1 to 3 ft away from the soundbar. In case you have the Bass module, place it 3” away from the wall in corner or near walls.

While there are differences between Bose 700 and 900, there are several similarities as well. They support Bluetooth 4.2, Wi-Fi, Spotify Connect, AirPlay 2 and the connections are also same. You will find an optical and HDMI eARC. Bose soundbars aren’t quite versatile in terms of connections. You only have the option to connect the HDMI compatible devices to your TV or you can use the HDMI switch.

To use the Dolby Atmos and 24-bit lossless audio, you must have a HDMI eARC compatible TV. In case you have an older TV model, the Bose Smart soundbar 900 will not work.

Bose 900 soundbar vs Bose 700, they both are expandable. You can include Bose module 500 or 700 subwoofer along with Surround speakers. The subwoofer is a must have if you are picky about the low-end in movies or music. Now, the overall cost will increase but, we think its worth to go with the whole package rather than just the soundbar.

Although there are wide range of other options where you can get a full 5.1 home theater system at an affordable cost. However, Bose lovers are willing to take the risk to go with the costlier option.

In this Bose 900 vs Bose 700 review, along with shedding light on positive aspects, we are honest about the downsides of the soundbar as well. Let’s have a look. None of these models have Night mode or Auto -Volume mode which will deliver a steady volume throughout the content, like between dialogue and movie effects. This is especially needed during nighttime. Inclusion of EQ settings would have improved the audio even more. 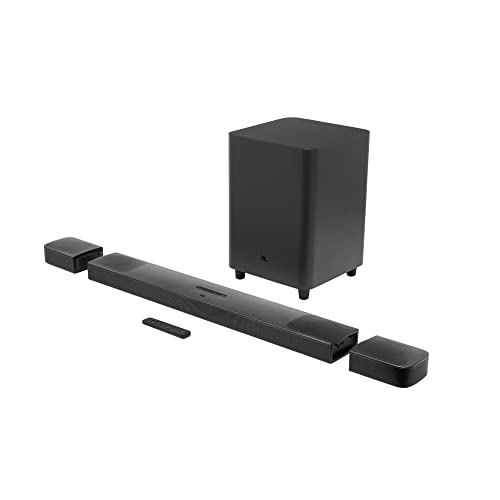 Comparing Bose 700 vs JBL Bar 9.1, the JBL will give a full package consisting of detachable surround speakers and a subwoofer. Unlike Bose 700, it has up-firing speakers and supports Dolby Atmos and DTS: X. It allows 4k passthrough with DV. The overall sound quality is more impactful and can create an immersive room-filling audio. 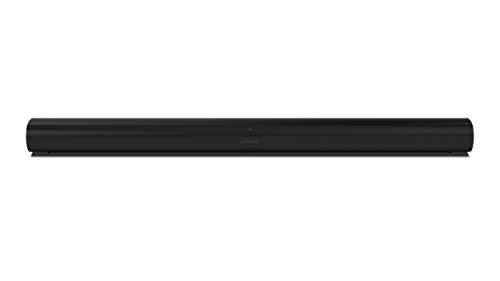 Sonos Arc vs Bose 900 comparison shows Sonos Arc performs better than the Bose 900. The cost is slightly higher than the Bose and it is expandable which will increase the cost even more. It has a 5.0.2 channel and supports Atmos. The bass is good, and the movies are enjoyable with dedicated center speaker.

Is Bose 700 soundbar worth the money? Bose products are slightly costlier than others. Bose 700 is suitable for users who doesn’t feel advanced features like Atmos is a must have. However, Bose 700 price doesn’t seem to match its features. You can get more at this price. But a lot depends on whether you are a die-hard fan of Bose or not.

Comparing Bose 900 soundbar vs 700, its best to go with the latest model. With more number of channels, the surround sound will be more immersive. However, if you want a decent soundbar for general use, Bose 700 will also perform well. Controls are much easier with voice. Universal remote of Bose 700 helps you to control other devices as well.

These soundbars are best for partying as they can get very loud. Low-end extension is adjustable leaving you the option to tweak it as per your taste. Lastly, you can always create a powerful home theater with the inclusion of the sub and the surround speakers. If you are a movie-geek or want top-notch sound for gaming, we recommend you to do so.

How to choose a soundbar for movies?

Soundbars like Bose 900 that have center channel specially to take care of vocals is ideal for movies. To enjoy movies, ensure the soundbar supports Dolby Atmos, Dolby Ditigal or DTS: X to create room-filling and cinematic experience. Movie effects and overhead effects should be prominent.

Are Bose soundbars worth it?

Soundbars are mostly designed to be an upgrade to your TV speaker. But creating a home theater system takes it to another level. Bose makes some of the best soundbars in terms of quality and flexibility. They are designed to make life easier. Bose soundbars might be costlier compared to other brands, but that’s partly due to brand reliability and popularity. Bose doesn’t mislead consumers, the performance of Bose 700 and 900 proves it.